Roger's Corner: Hey Paulson: What Were You Thinking?

President Barack Obama and his new administration have had a busy fortnight. Not only has he been focused on getting his team up and running to handle the challenges of the economy, healthcare, infrastructure, terrorism and foreign policy, he apparently now has an additional responsibility left over from the previous administration: Chairman of the Board. We can thank the former Treasury Secretary, Hank Paulson, for giving the President of the United States the dubious honor of pseudo Chairman of the Board for Citibank, AIG, JP Morgan Chase, Wells Fargo, Goldman Sachs, Morgan Stanley, Bank of America/Merrill Lynch, General Motors, PNC and U.S. Bancorp. This happened because, rather than structure the TARP funds as loans or guarantees to these institutions, former Secretary Paulson, emulated Great Britain and invested money in the form of preferred shares. Basically, he nationalized these firms. Firms that Received TARP Funds: Did you know that top executives were restricted from receiving bonuses? All bonuses went to the junior staff. 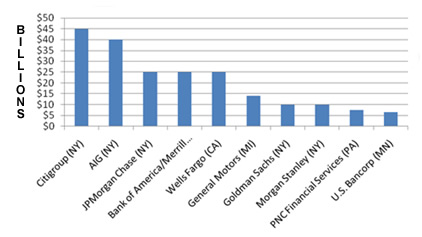 Former Secretary Paulson: what in the world were you thinking?! You are no longer the CEO of Goldman Sachs. You were working for the government. You touted this strategy of using taxpayers' money to buy preferred shares as a great investment. Need I remind you that the government is not an investor? Now these government administrators - many of whom have never run a business - have oversight and direct input (as a right of owning preferred shares) in how these businesses should be run on a day-to-day basis. President Obama says the $18.4 billion in bonuses paid to Wall Street firms is "the height of irresponsibility." Why does he get the opportunity to opine on such a topic when normally this would be a private business matter? Well, the government is an investor in these companies and Wall Street is the target industry to berate right now. Yet never mind that, according to Robert Whalen, a spokesman for the New York State Office of the Comptroller, "While the biggest, U.S.-based banks (such as Goldman, JPMorgan Chase, Citigroup, Morgan Stanley, etc.) account for the lion's share of the pool it also includes employees of foreign banks, such as UBS and Deutsche .... We do not contemplate whether or not firms participated in TARP." In addition, TARP placed restrictions on bonuses for top executives - and many have voluntarily forgone bonuses - but it did not impose limitations for lower-level employees. In other words, not all the bonuses paid to Wall Street firms were from TARP recipients and those that did receive TARP funds, only junior employees (the men and women who really do the work) received bonuses. But that doesn't stop the government from telling us how to run our companies. Now, don't get me wrong. I do believe that regulation is necessary, as the government is responsible for the public's safety and security. And we certainly don't want to see any more peanut butter scares or Bernie Madoff scandals. But is it really the "height of irresponsibility" to pay what employers' believe that employees deserve? Bonuses are where many of the Wall Street employees expect to make a large majority of their compensation. If they didn't receive this bonus, they'd work somewhere else, presumably making just as much or a little bit less throughout the year, rather than wait for the lump sum bonus. The industry is much like the retail sector, where each retailer basically breaks even or loses money throughout the year until the holiday season when they turn a profit. And at what point does this stop? Is the government going to have an opinion on every day marketing decisions? Oh, they already have with Citi's decision with the New York Mets' new baseball stadium, now named "Citifield." Apparently, as of the writing of this column, Citi, facing widespread criticism, has told the Mets it won't walk away from its $400 million deal, but it may try to alter the terms, according to the Wall Street Journal. All of this is beside the point, however. A legitimate argument can be made that the handing out of these bonuses and keeping the Citi marketing pact were the responsible things to do. But why are we debating on this in the first place? The government should not be in the business of running the financial industry. I plea to the new Treasury Secretary to stop the insanity. Mr. Secretary, sell these preferred shares and use the TARP money strictly to make a market for those "toxic" assets, not invest in and therefore nationalize any more companies. The government's number one priority is the safety and protection of its citizens. I fear that - while the president and his administration are focused on worrying about how its preferred share investments are performing - a task they are ill-equipped and inexperienced to handle - they are letting the rumblings of another terrorist attack happen. I pray to God that I am wrong.Rogers

You need to be a user of M&A Links to add comments!